By now, you have probably already heard the word blockchain, including how well known, previously unknown and brand new businesses are boosting their revenue by integrating blockchain applications in business. Currently valued at a little over a billion dollars, Meticulous Research estimates that the blockchain applications market capitalization will shoot to at least $23 billion in less than five years. 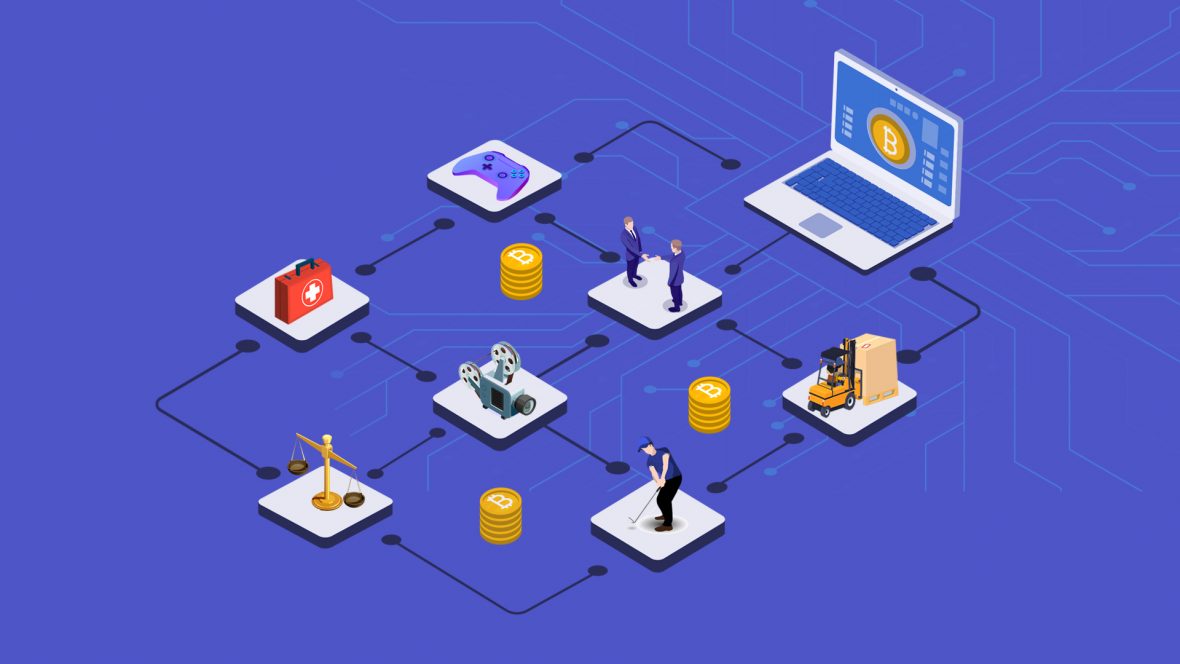 What Blockchain Is And What It Is Not

Defining blockchain is usually best done using analogies and especially emphasizing what blockchain is not. For a start, blockchain is not a one-size-fits-all, magic-potion solution to all of life’s problems. In fact, ledgers existed long before the first century. They were, however, centralized, in the control of a single authority, and access given to specific people.

Satoshi Nakamoto, Bitcoin founder, was the first to develop a use case for the new technology in the financial services industry. Bitcoin, a digital currency, lets people transact without the need for banks and other middlemen. It can be argued that blockchain is not a new technology, but just a combination of several other existing technologies such as peer-to-peer, cryptography, hashing, mining and consensus algorithms.

Beyond the hype, there are various reasons why the blockchain has become attractive to individuals and entities, private and public. Here are a few of those reasons, being the features of the blockchain.

It’s easy to get lost in the euphoria of how blockchain applications can benefit businesses, as we will see in the use cases to be outlined shortly. Hence, it’s also important to see the whole picture. Following are the significant challenges with Blockchain Applications:

Blockchain applications in business can be clustered into three broad areas –

1. First is where there is a need for an immutable record, example, entry and exit on a country’s borders or financial transactions. There are exceptions to immutable blockchains as well, like the Accenture blockchain which uses the Chameleon hash.

2. Second is where there is a need for digitization of physical assets, an example can be representing a car, house or land digitally with a unique cryptographic hash.

3. Third is where there is a need for digitization of processes, for example, the process of company incorporation until collection of incorporation certificate.

The healthcare sector is one of those still labouring under an archaic system. Patient medical data are incomprehensibly entered into some paper file and carelessly shelved somewhere. Digital equivalents are centralized, prone to manipulations and cyber attacks.

Beyonce recently trending in the news brought attention to how she is smartly handling intellectual property in her works, from taking payment in stocks to negotiating partial payment in exchange for full rights. This is probably easy for someone who is already an established artist and can afford professional advisors. What happens to the upcoming ones? Most times they have to slave under a label until a big break comes, or risk being popular but broke.

We are now in the digital age where other people’s work can be copied and disseminated to millions with just a click and without the owner’s permission or knowledge. Current DRM (Digital Rights Management) measures have been largely ineffective due to the internet providing the tools for unauthorized infinite reproduction of people’s intellectual property. Implementing blockchain would remove the gatekeeper veil, allowing creators connect directly with their fans, transparently track engagements and sales, manage the license of their copyrights and conduct private auctions.

The future of work is fast moving away from suffocating cubicles to wherever creativity leads. But is the workforce ready or well equipped? Bear in mind that fellow humans are no longer the competition – Think bots.

Blockchain applications in HR include utilizing as an alternative system for data-sensitive and cumbersome third-party verification. Job seekers can easily prove the existence of a skill, certificate or degree. HR managers for globally distributed workforces can now keep their sanity as they try to effect cross-border payment of employee salaries, allowances and benefits. It’s also possible to create corporate currencies or tokens that employees can easily accumulate as they meet KPIs.

Internet Companies or web-only businesses are now the fast-growing norm. Employees are distributed in different continents, with everyone collaborating in the cloud. At the centre of blockchain technology is the ability to create a Decentralized Autonomous Organization (DAO) which can govern itself based on code (smart contracts) alone. This is where rules of governance embedded in code, determine how the organization is run. Some describe this as a situation where code is law.

Ticks a box in the three clusters earlier mentioned, and therein lies its definition. Tokenization is the representation of assets digitally on a blockchain by assigning a unique hash, usually numbers, to a specific asset. Assets could be digital (photographic images, ebooks), financial (shares, derivatives) or physical (land, cars, diamonds). Aforementioned examples can all be categorized as non-liquid assets, because they are not easily converted to cash. As a result, the tokenization use case makes it easy for such non-liquid assets to be “cheaply and efficiently fractionalized, traded and settled.” What this means is that in addition to unlocking liquidity, the previously unattainable barriers to entry for small businesses and retail investors is lowered.

Remember the three blockchain applications/ use cases clusters mentioned earlier? The supply chain industry ticks all those boxes. It’s no surprise then that heavy developments in that direction are ongoing. Most notable is the joint venture between IBM and Maersk. An estimated $634 billion is lost in one of the most opaque systems in global business, caused majorly by data being managed in silos. Leveraging blockchain technology features like time stamping, transparency and immutability; merchants and consumers alike can track an item straight from the manufacturer to getting into the hands of the user.

When trying to explain the immutability of data entries on the blockchain, real estate is a favourite staple. A lot goes into the purchase of land or house; unending paperwork, high-rates hourly-billing lawyers, shylock banks and the bureaucratic government. The obvious loopholes of this process means there are times when it is impossible to prove ownership because possession does not automatically translate to ownership.

Industry 4.0 is picking up pace and with it, the rate of global energy consumption. However, more than half of the energy is wasted i.e. expended and billed for but not actually being used for anything. When a complete conversion to clean energy happens, here are some blockchain applications reprieve for the $130 billion lost in wasted energy. For instance, tokenizing energy means customers can sell off unused portions of their quotas and minimize waste. Also, there’s the use case of rewarding tradeable energy tokens to companies adhering to regulations relating to carbon emissions and energy waste disposal.

Richard Jarecki is likely a name you have never heard of, but in the 1960s, he won over a million dollars (about $8 million in today’s value) from betting at casinos. And he did not leave it all to chance. He beat the odds against casinos who always set up things in their favour. These days, most gambling and lotteries happen online, and they also have issues of trust and security to grapple with.

When a system is decentralized, it automatically levels the playing field for everyone involved. That’s what blockchain does to online gambling. Rules of entry become easy for virtually everyone to be able to meet. Also, using cryptocurrency to facilitate payments means legal restrictions imposed on payments in traditional currency like dollars and Euros, no longer matter. Being a decentralized system built on the blockchain, everyone – operators, programmers and players alike- would be able to monitor other’s actions. Finally, online gambling players can take advantage of the anonymity offered by cryptocurrency in making payments or receiving their winnings, since they are only identified through a wallet address.

Imagine social sports communities where fans can engage with their sports idols and clubs in a direct manner. Today’s sports is an innovation team with key players like artificial intelligence, robotics, biometrics, machine learning and analytics. Signing on the blockchain would score goals like incentivising active contributors to the ecosystem, as new possibilities for sporting interactions are unlocked.

Law and government always play catchup to technological advancement, reason we still vote by thumbprinting when we already have facial recognition technology. Be it for things like voting in elections or identity management, blockchain can track and verify votes cast and people’s ID. Smart contracts could change the way governments run their nations and serve as the legal engine of a country. Countries like Dubai are already hard at work utilizing smart contracts in building an efficient automated smart city.

Above is not an exhaustive list of blockchain applications/ use cases, as new possibilities are discovered daily. Compared to the era of the birth of the internet, blockchain technology, which is just a decade old, still has a long way to go. As things get refined and the technology scales, we can expect its potential to exceed limitations.

The Future of Software Development Within Industry 4.0 Toptal Review: Is it worth the expense? Outsourcing vs Insourcing for Tech Startups

How to Craft a Freelance Resume as a Developer Dev Shops – What are they, and when to use them? Upwork Reviews & Alternatives for Hiring Developers
Work with top startups & companies. Get paid on time.
Try a Top Quality Blockchain Developer for 14 Days. Pay Only If Satisfied.